Allah: “The earth is flat!”

In 1996 it was (possibly erroneously) reported that Saudi Arabian Salafist Islamic scholar Abd al-Aziz ibn Baz claimed that the earth was flat. He allegedly later changed his mind about the flat earth after hanging out with an astronaut who had seen the earth from space. While this modern flat earth claim is apocryphal at best, there is another modern Islamic leader who vehemently claimed the earth is flat.

Mohammed Yusuf, the deceased founder of the infamous Boko Haram, once gave an interview where he condemned Westernized education systems because they teach things that go against the Quran’s teachings:

“Like saying the world is a sphere. If it runs contrary to the teachings of Allah, we reject it. We also reject the theory of Darwinism.”

Why would Yusuf say this? It’s absurdly absurd (I couldn’t think of a better word, sorry). How could anyone in modern times reject the fact that the earth is round? Human beings have known (or at least assumed) the earth is round* for 2,500 years. Pythagoras and Aristotle knew this 1,000 years before the Quran was written. But that’s just the thing. The Quran. Mohammad wasn’t very educated, so he probably never read Pythagoras’ round earth findings. And thus, the Quran says the earth is flat. Numerous times.

I’m not going to even mention every time the Quran makes this false claim. That would make for a very, very long post. But here are a few of the highlights. (Really, I only need to list one).

Taha (20:53): “[It is He] who has made for you the earth as a bed [spread out] and inserted therein for you roadways and sent down from the sky, rain and produced thereby categories of various plants.”

So the earth is a bed that is “spread out”? There are countless other references about the earth being “spread out.”

Surat Al-Kahf (18:47): “One Day We shall remove the mountains, and thou wilt see the earth as a level stretch, and We shall gather them, all together, nor shall We leave out any one of them.”

In other words, the earth would be completely flat if not for those pesky mountains. (Note that newer translations of the Quran replace the words “level stretch” with the word “prominent.”)

Surat Al-Baqarah (2:144): “We have certainly seen the turning of your face, [O Muhammad], toward the heaven, and We will surely turn you to a qiblah with which you will be pleased. So turn your face toward al-Masjid al-Haram. And wherever you [believers] are, turn your faces toward it [in prayer]. Indeed, those who have been given the Scripture well know that it is the truth from their Lord. And Allah is not unaware of what they do.”

This is the verse in the Quran Muslims reference when teaching young Muslims to pray in the direction of Mecca. The Quran seems to think that facing east or west (or whatever direction) is the same as facing the Qibla, which might be on the opposite side of the world. If I face east, my gaze is pointed to outer space. This humorous diagram illustrates the point: 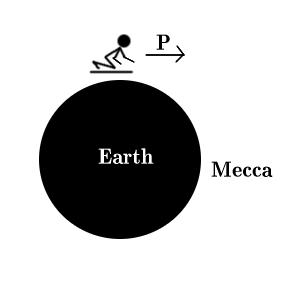 In order to actually be facing Mecca (unless you’re already fairly close to the city), the earth would have to be flat! Otherwise, when my roommates pray they’re more likely praying towards the International Space Station, which literally couldn’t be in space if the earth was flat.

The vast, vast, vast majority of Muslims reject teachings that the earth is flat. No one’s saying that Muslims believe in a flat earth, but their prophet certainly did. And their holy book certainly does. This should be a sufficient reason to critique the rest of the book. If it gets something this easy wrong, it probably gets a lot of other stuff wrong as well.

*Of course, I mean spherical. I’m too lazy to type that over and over again, so “round” will stand in its place.

2 Responses to Allah: “The earth is flat!”