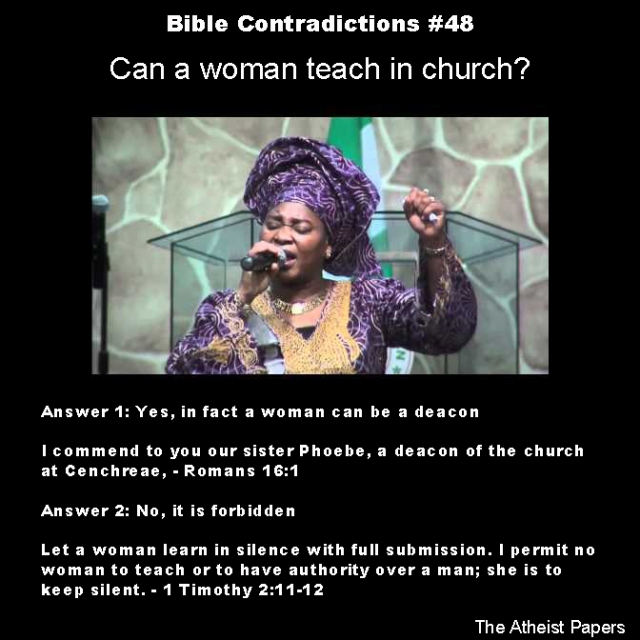 The reservation of the priesthood to males, as a sign of Christ the spouse who gives himself in the Eucharist, is not a question open to discussion … But we need to create still broader opportunities for a more incisive female presence in the church.

In other words, women are and always will be forbidden from priesthood, but he’s willing to give them more authoritative roles in the church. What those roles are, however, is unknown.

But when we look across the Christian isle towards the other churches, we see many female preachers, rectors, and other clergy members. So why the divide? Well, it might have something to do with this issue’s uncertainty in the bible.

In Acts 18:26 a young and energetic but vaguely naive priest named Apollos spoke at church, a woman named Priscilla took him aside and taught him the correct way to priest. In Romans 16:1 Paul refers his readers to “Phebe our sister,” who is a deaconess. A few verses later in Romans 16:7 Paul calls his relative Junia prominent in the church. These verses might explain the female rectors in the Pentecostal church.

But we all know those other verses — the anti-woman ones. In 1 Corinthians 14:34-35 Paul says it’s shameful for women to speak in church. In 1 Timothy 2:11-12 we are told that women cannot have authority over men, which means women cannot hold leadership roles in the church, especially as priest (and it also means Sarah Palin can never run for president).

I’ve read through some apologetic interpretations of this contradiction (here is another one). Unfortunately, the authors of these interpretations go out of their way to perpetuate the subjugation of women under men in terms of priesthood roles. In other words, they defend the anti-woman verses while tearing apart the pro-women verses. None of them attempt to reconcile the bible with modern standards of decency. The simplest solution is to liberalize the church in terms of gender roles. Other churches have done this will no ill effects. God has not smote a single female church leader. But agencies such as the Catholic church continue to refuse women into the priesthood. This might be one reason for the generational shift away from Catholicism (and maybe even the generational shift towards non-religion).

24 Responses to Bible Contradictions #48: Can women teach in church?