Santa Myth is Not the Same as Religious Myths

For as far back as I can remember atheist bloggers and others have been drawing a comparison between telling your children Santa is real and telling your children they can literally live forever if they believe in Jesus. I’ve repeated this too, but today I had the following conversation with my girlfriend about this article (little girl sends her parents middle finger emoticon after learning the truth about Santa): 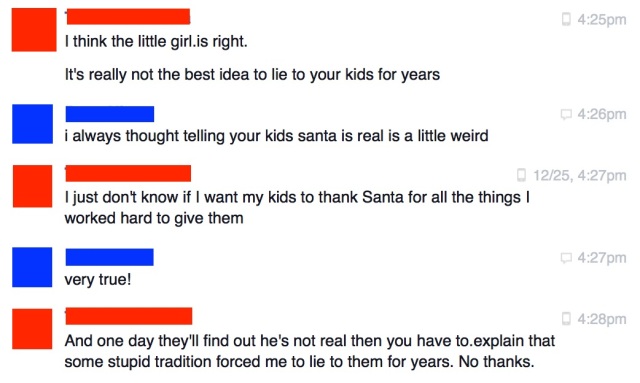 My girlfriend (in red) is a Christian, raised Southern Baptist. She knows my religious ideas and doesn’t mind at all (but that’s a different post for another day). But it’s important that she’s a believer and saying this because it shows us that the belief that telling your kids Santa is real is blockheaded is not solely the domain of non-believers.

I especially like it how she hits the nail on the head with “I just don’t know if I want my kids to thank Santa for all the things I worked hard to give them.” BAM!! I totally agree with this because we should be teaching our kids to appreciate the value of work and money—and not that material goods can magically appear (by some fat ass in a red suit who comes down your chimney, no less).

Most important, and back to the point in the first paragraph, telling your kids Santa is real is a lie. We know for a fact it’s not true. And, in my opinion, and in my girlfriend’s opinion, we should not be lying to our children. The reason I don’t think we should be comparing Santa to Jesus (or any other religious story) is because we don’t know if it’s true or false. Telling my children Jesus is really god’s son is not something I’ll ever do, but it hardly falls under the category of lie. Telling your children something is true when we don’t know it to be true or false is not the same as telling them something we know to be false.

And finally—and to repeat an oft-made argument—telling your children the truth about Santa from day one is a great way to instill healthy skepticism in young minds.

I'm a political and social activist.
View all posts by Rayan Zehn →
This entry was posted in Atheism, Uncategorized and tagged Atheism, Christianity, Christmas, Religion, Santa Claus. Bookmark the permalink.