Should Christians bring back the beard?

The short answer to the question I pose in the title is, unfortunately, no. They have no reason to. Christianity is more about grace than it is about grooming practices. Contrary to a few other religions, Christianity does not teach that salvation comes through growing a beard. This is a little frustrating to me. Having previously lived in a Middle Eastern country where beards are as common as Nike tennis shoes, the professional social stigma against beards in the United States stings even more. But the stigma is changing. It always does. Beards go in and out of vogue on a regular basis here. So what if there is some way to reconcile the beard with the largest religion in the US, Christianity?

First, I will examine popular depictions of popular religious figures. Second, I will contrast that against what the bible actually says about beards. Lastly, I’ll make my argument.

One of the most interesting aspects of Christianity is its ability to confine the power of its god through human-defined and created contours on a canvas or relief or free-standing chiseled stone, despite the Exodus prohibition against making graven images. These biblically-inspired works of art are wonderful, and many of them depict god or his followers sporting quite remarkable beards. Here’s a painting of literal god offering Jesus a spot at the throne of heaven.

God has an awesome beard (according to the painter). But what about men? Here’s a well-known image of Abraham doing that thing Abraham did (you know what I’m talking about).

Wow! That’s one hell of a beard! And what about Jesus? Here’s a composite of the historical Jesus through the lens of several societies. 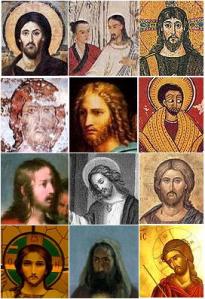 Eh. He still rocks a good beard (even Oriental Jesus), but let’s be honest; he’s got nothing on Abraham’s incredible, divine locks (to be fair, however, god’s beard does come close).

What I’m trying to say here is Christianity, as conceptualized through artists’ renditions, and often commissioned by Papal funds or other church coffers, depicts a holy land replete with god-fearing, bearded men. And heaven itself is ruled by a bearded man and his bearded son. It was almost as if the bible itself commanded every man to grow a beard. And that brings us to part two of this post.

What does the bible say about beards? Well, it says a lot in the Old Testament. For example, when Kind David pretended to be insane, he drooled down his beard. Aaron had a beard.  Samson had a beard (he took a Nazarite vow, which meant he didn’t cut any hair). And one of Saul’s sons grew a beard (albeit while in mourning). There are many, many other awesome beards mentioned in the Old Testament, but not so much in the New. Then again, the OT does mention that Jesus will sport a beard.

I gave my back to those who struck me,
and my cheeks to those who pulled out the beard;
I did not hide my face
from insult and spitting.

Note that the Isaiah verse is a prophesy.

You shall not round off the hair on your temples or mar the edges of your beard.

Of course, this is all meaningless because, as almost any Christian will point out, Christianity is not about adhering to the arcane and arbitrary laws of the Old Testament. Christianity eschews many of those rules in favor of grace through honoring the sacrifice their god made to save their souls from sin. Then again, what better way to honor your god than to embrace his creation?

My argument is that both artists’ renditions of biblical figures and the bible itself show men with full and luxurious beards. Even Jesus himself wore a beard. If this is true then it might be that these men grew their beards because it was part of their god’s creation. God created men with an ability to grow facial hair, and instead of shunning that ability, these men exalted the gift upon which god had bestowed them.

If Christian men in the United States stopped shamefully shaving their god-given facial hair, the social professional stigma against beards would evaporate overnight. If there were a Christian-led beard revolution, wherein Christian men assumed their god-given gifts, there would be no stopping the beard anywhere. There would be no more beard policies at the workplace. (And don’t even try to tell me the bans could still be in effect in the food industry. Hair is not a health hazard. It’s just gross to find in your food). We would have a bearded president. Our military might lax their prohibition against facial hair. And even better, I can grow my beard long without being called “hippy” or “Gandalf” or being mistaken for an Islamic radical (that happened in Lebanon once).

When David was told, he sent to meet them, for the men were greatly ashamed. The king said, “Remain at Jericho until your beards have grown, and then return.” – 2 Samuel 10:5

I'm a political scientist.
View all posts by Rayan Zehn →
This entry was posted in Uncategorized and tagged Atheism, beards, Christianity, God, Religion. Bookmark the permalink.