Self-Immolation and the Threat of Hell: Why Is Hell Insufficient to Prevent Altruism?

In my academic life I’ve been called a person who is interested in the “strange.” While most people in my field research the international political economy or diplomacy, I’m out there researching suicide protest and — the latest interest of mine — how the DIY biohacking community might introduce genes into the scope of scrutiny.*

*There’s a Science Sunday post waiting to happen. A friend of mine in the engineering management field and I are drafting a paper on this topic.

Back to self-immolation. When I finished my major study on self-immolation, I was left with many unanswered questions, which is to be expected considering I can’t get into the minds of dead people. One of these questions was: What role does religion play in compelling people to set themselves on fire to protest a social wrong? Unfortunately, if you’re here looking for answers, stop reading now. Currently, I have no answers. This is merely to show a gap in our knowledge.

Out of the data for I collected on 488 cases of self-immolation from 1963 to 2012, all of them professed a religious component to their decision. I should clarify. Not all of them left suicide notes, but those who did were explicit in the religious aspect of their suicidal act of protest. This is very interesting if we look at who are killing themselves. 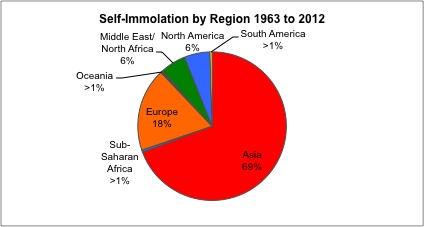 This religious theme uncovers interesting questions. First, is belief in god correlated with the decision to self-immolate? Michael Biggs notes that the vast majority of self-immolations from 1963 to 2002 were “most frequent in countries with Buddhist or Hindu religious traditions…” Additionally, he points to belief in a supernatural being as a motivational factor in the decision to self-immolate. He writes, “Self immolation is an exchange: in return for the sacrifice, a supernatural agency will intervene on behalf of the cause.” While this might indeed be a motivation for believers in the Eastern gods, it cannot definitively be stated that it serves as a motivation for believers in the god of Abraham; the Abrahamic god promises no eternal reward for suicide, but rather eternal suffering.

That last sentence is the important one. Why did roughly 150 Christians and Muslims commit suicide — even altruistic suicide — when the teachings of their faiths had them believe suicide was an eternal sin?

Let me break this down and give some context.

These are people who kill themselves because they believe their deaths will have a positive impact on the society in which they live. This is altruistic suicide, not selfish suicide. They believe this so much that they are willing to spend eternity in hell in order to better serve their fellow human beings. In other words, not even the threat of hell can dissuade them from acting in a self-destructive manner. Additionally, these were all very religious people who surely must’ve known about the teachings of hell within their respective religions.

To put this into context, zero known cases of self-immolation were carried out by self-professed atheists (which raises yet another question, but that’s beyond the scope of this post).

That is, self-immolation appears on the outside to at least withstand the idea of eternal punishment, but it does so in a strictly religious context. If the opposite were the case, we might expect more atheists to commit suicide protest. At most we might be able to say the victims of self-immolation acted because they believed their suicides would not only make the world a better place, but also god would look favorably on them for their sacrifice. Unfortunately, we can only speculate this because dead people aren’t very good at telling us the answers.

This is a very interesting topic to me, and I expect I will continue examining this phenomenon in the future. There is a lot more research needed, and I hope I will be able to provide some insight into how we can make better sense of these acts. The very, very unfortunate reality of my research is, however, that in order to better understand self-immolation, more people will regrettably die. That is, I need more data points, and I must confess, that’s a reality I struggle with every time I add a person’s name to my database.

I'm a political scientist.
View all posts by Rayan Zehn →
This entry was posted in Research and tagged Atheism, political science, Religion, Self-Immolation. Bookmark the permalink.

3 Responses to Self-Immolation and the Threat of Hell: Why Is Hell Insufficient to Prevent Altruism?