A bunch of Christians and an atheist on Christmas morning: I was not expecting how I was treated

Each year for Christmas my family uses Elfster to coordinate a secret Santa-type gift exchange. The website randomly pairs family members together, with a $50 maximum gift cost. Usually I ask for that $50 to be donated to a secular charity. I log in to the site, type in what I want, and it instantly sends what I want to my secret Santa. This year I decided to conduct an experiment. I asked for books about atheism. It just so happens that this year I was paired up with the most religious person in my family.

I did not expect what happened next. 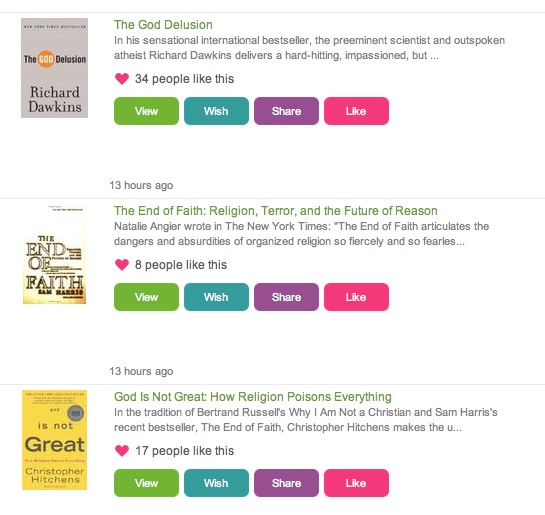 This is what I asked for.

First, let me rewind a little bit. Immediately after submitting the three books shown above to my Elfster wish list, my sister sent me the following message over Facebook:

To be honest, I always thought my sister was Christian. I had no idea she considered herself “an agnostic at most.” So, awesome! But regardless, my sister has always been the most open minded person in the family. So I was a bit surprised that she found offense in my wish list. Remember, all I did was merely wish for three books. I left no commentary about religion or Christmas.

Also, I’ve never really discussed my atheism with my family. So this wish list was an informal way of outing myself to a group that probably already assumed that I don’t believe in god. After receiving that message from my sister, I assumed that Christmas would be awkward at best, and everyone-pick-on-our-heathen-atheist-Ryan at worst.

No matter what, I didn’t expect to actually get the books on my wish list.

So Christmas morning comes, and I’m given a gift from my secret Santa, who happens to be my ultra religious aunt. It’s a card. I’m expecting a gift certificate to Amazon and a letter explaining why she can’t buy the books herself. I was halfway right. Here’s the contents of the card (she gave me a donation in my name of $50 to savethechildren.org):

I chose this gift for you before you told us about pay-it-forward. I love that concept. What are their stats? This one [Save the Children] has 5% mgt, 6% fundraising, 89% programs. Being a Christian, I didn’t feel I could buy the books you wanted. I think if you explored Christianity as you do other things, your perspective would change. Your inquisitive mind will show you things others may not see. Try not to put shutters on any subject. You are my crazy-off the wall-nephew and I love your differences, but that doesn’t mean I agree with them.

She also gave me some seeds for my garden, which was awesome!

Anyway, despite her little jab at me (assuming that I’m not Christian because I haven’t looked into it), she basically said (in my words, paraphrased) “good on you for being different!”

I expected anger, not acceptance. I mean, I expected tolerance because I’m family. But I didn’t expect her to be so open about it.

She and I briefly spoke about atheism. It appears that my 15-year-old (or thereabouts) cousin believes he’s an atheist. My aunt mentioned her desire to allow him to figure it out for himself.

The moral of this story is that sometimes it pays to be open about atheism and to discuss your views with your family. I feel like I’m lucky because when I put everything out there, everyone was happy for me. I know many people with opposite experiences. But you never know until you try it.

PS. This is in no way promotes Save the Children. To be honest, I don’t know much about them as an organization. I’m not even sure if they’re secular or not.

PPS. In a strange twist, Elfster teamed me up with my uncle, who asked for $50 in canned goods to be donated to his church. I’m vegan, so I hope the homeless in his city enjoy vegetables!

1 Response to A bunch of Christians and an atheist on Christmas morning: I was not expecting how I was treated