It’s my opinion that if you post something in a public forum, your comments are fair game for public criticism. With that stated, last night I clicked on a Facebook image from Fox 45 Dayton that asks, “Do you believe Same-Sex Marriage should be legal in Ohio?” The image in question is below: 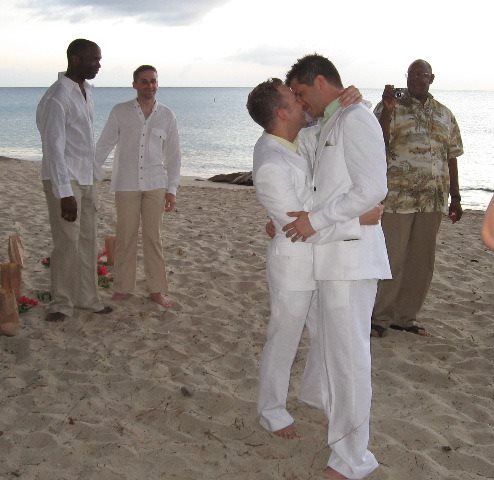 The image is a simple image — two (I’m assuming) recently-married men on a beach, flanked by family and friends and another couple — but the question is perhaps purposefully provocative. That is, Fox 45 Dayton implicitly wanted the image to go viral with religious fanatics and same-sex marriage supporters squaring off. Fox got exactly what it wanted. Religious fanatics flooded the comments with religious bigotry. So I did what anyone in my position would do; I took numerous screen caps to call out religious bigotry where I see it.

Below you will find these comments. I’m not censoring their names because, as I stated before, these comments were left publicly. Besides, they probably stand by these statements anyway. I’m lazy so these are in alphabetical order. Note that not all of the original comments are bigotry; some show bigotry in the replies.

I hope that all of you will follow suit, exposing bigotry everywhere you find it. 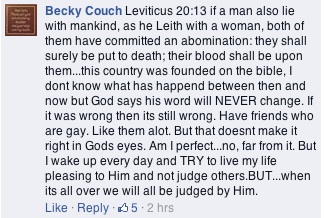 Gays choose to be different? I would imagine you’d find it impossible to choose to be gay. Go ahead and try it. 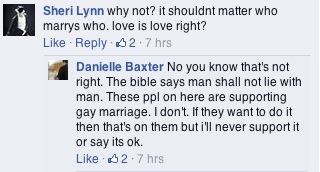 Actually, love is love. Sheri had it right.

I would totally marry my cat!

Your bible has no power.

LOL at Sara’s response! I couldn’t have said it better myself! 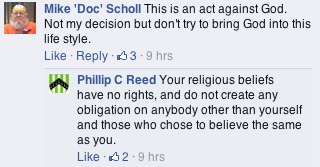 Please tell me more of what the lord say.

What the fuck does “he’ll no” mean? He’ll no what?

We don’t want you to “except” anything. That doesn’t even make sense!

The bible is very clear about a lot of stuff. How many of your children have you murdered for disobeying you?

So is your bastardization of Jesus’ teachings.

Is that THE Will Smith? I hope not.

As a recap, if you’re gonna be a bigot, people like me will call you out.

7 Responses to Exposing bigotry: Here are some Christians very angry about same-sex marriage