Abraham’s Pyramid: How religions built on other religions die

Jumping off of yesterday’s post about evolution negating the religions that rely on Adam and Eve, I have developed what I will call “Abraham’s Pyramid.” The basic premise of Abraham’s Pyramid is as follows: Christian doctrine relies on the validity of Jewish doctrine. If we take original sin out of the equation (by removing Judaism) then Christianity will collapse. Islamic doctrine relies on the validity of both Jewish and Christian doctrine. If we remove either original sin or Jesus (or both) then Islam will collapse. This is, of course, an inverted pyramid. See below:

Each tier higher than the last relies on the tiers below it being true. The higher up the pyramid you climb, the less stability you have. For example, if Jesus a) did not exist or b) was not resurrected, then that spells big trouble for Islam, but it doesn’t mean much to Judaism.

If we remove (as was mentioned in the beginning of this post) Adam and Eve, this is what the pyramid looks like: 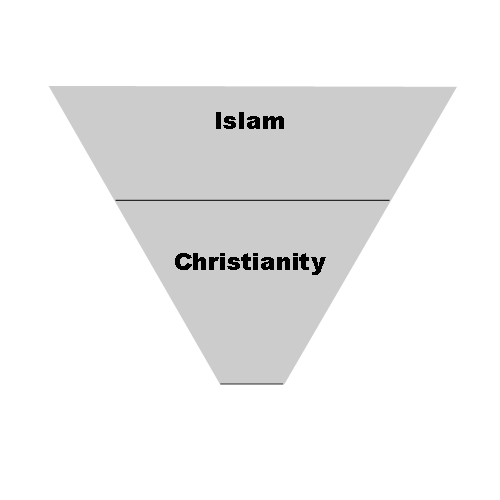 Adam and Eve are central to the Jewish faith. Their actions lead to original sin. Original sin creates a need for a savior to save us from death that will reveal himself at no specific time. The Torah goes out of its way to build lineages from Adam and Eve to various other figures, such as Noah, Abraham, Moses and David. If we bring evolution into the mix, Adam and Eve did not exist, and therefore no such lineages are true, which casts doubt (at best) on the rest of the Jewish faith. At worst, it utterly destroys Judaism.

Another metaphor we might use is a tree. I’ll admit that I was first tempted to use a tree, but my photoshop skills are not the best in the world (hence my rudimentary pyramid). Judaism is represented by the roots. Judaism feeds Christianity (the trunk), which in turn feeds Islam (the branches). If we cut out the roots, the rest of the tree dies.

And as I wrote yesterday, evolutionary theory essentially does just that: cuts out the roots of Christianity and Islam. This is why building a religion on the back of another religion is dangerous. This is also why we can feel comfortable saying that the religions of Abraham are false.

Post Script: I anticipate a rebut that claims Adam and Eve were allegorical (original sin came not from the first man and woman but rather from our inherently evil ways). This argument is interesting because it strays far, far away from the bible in an attempt to save the bible. If this is their argument, they might ask why the bible isn’t more clear. They might also ask why the bible needs saving. The bible isn’t very strong if it relies on mere humans to protect it.

3 Responses to Abraham’s Pyramid: How religions built on other religions die